This year’s ruhrSUMMIT took place as a hybrid format on June 29 and 30, 2021. Organized by the ruhrHUB, the event offered people interested in founding, startups, companies and investors the opportunity to engage in an exchange and to catch up on the latest topics and areas of interest from the startup cosmos.

In addition to various presentations on key topics by experts, there was also the opportunity to follow live discussion rounds or to talk directly with founders and experts via the matchmaking platform. In addition to a wide range of start-ups and companies from various industries, the Worldfactory Start-up Center represented through Vanessa Vaughn and Melusine Reimers also presented its support services as well as its international program for researchers interested in founding. The two days offered an exciting potpourri of different opportunities to get in touch with the start-up scene for the first time or to strengthen existing interest, to expand the network and to get interesting scene insights.

There is no question that events of this kind are important for founders, experts and investors, but why are they at least as exciting for people interested in founding? To answer this question, different event aspects have to be considered. A clear plus point is the low-threshold availability. The ruhrSUMMIT is open at favorable conditions even for those who have not yet founded a company themselves but are perhaps initially only interested in the topic of founding. At the same time, those interested in founding should take advantage of every opportunity that arises for them to exchange ideas with like-minded people and to expand their own network. A good network is very important and valuable not only in private life, but especially in the context of start-ups, because good personal networks contain a great deal of expertise and can make a significant contribution to broadening one’s own horizons. Under the current conditions, however, it can be quite difficult to build up such a network or to maintain existing contacts. Events like the ruhrSUMMIT with functions such as the matchmaking platform can be a great help in meeting old acquaintances or making new contacts.

For people who are already firmly established in their interest in founding and who are already working on their own ideas, the opportunity to exchange ideas with potential customers and investors is also very valuable. In this way, it can be ensured that the business idea meets with interest and important thought-provoking impulses for possible iterations can be gathered. Start-up projects in chemistry are usually designed for the business-to-business market, so direct contact with companies that might be interested in the business idea and the associated product or service in the future is particularly valuable. In addition, there was the possibility to present the own company on the pitch stage in order to generate more publicity for the own idea and to get to know new start-ups.

In summary, it can be said that events like the ruhrSUMMIT are not only important for founders, but are at least as attractive for scientists interested in founding a company. We are already looking forward to the ruhrSUMMIT 2022! 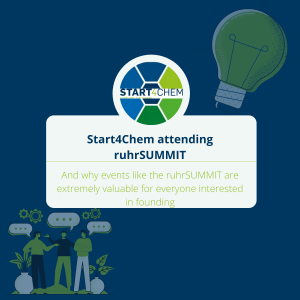